You are here: Home / CAN DBC Driver

CAN DBC driver is intended for operating with CAN Gateways produced by Beckhoff (EL6751) or koenig-pa (EtherCAT4CAN Gateway). In automotive testing industry CAN-nodes (ECU and etc.) are described in a special file format called “DBC”. In such a file for an analogue sensor, e.g. offset, gain and physical unit are defined. CAN DBC driver allows user to load this DBC-file into KPA EtherCAT Studio, select the CAN-messages, specify settings for CAN Master and driver queue length. After that KPA EtherCAT Master and the CAN Gateway are configured accordingly. The driver works with both DBC messages and unspecified messages (CAN messages not described in DBC file). CAN DBC driver is a superstructure over Master Process Image and is intended for working with EtherCAT-CAN gateways in Raw CAN mode. Generally, the algorithm of the driver’s work may be represented like: EtherCAT-CAN gateway receives data into its buffer, Master takes this Process Data and allocates received data in Process Image, the driver copies the data into its buffer, parses them and put into Customer area of Process Image (in accord with settings which were defined while configuring through the Studio plug-ins’ tools). Currently CAN DBC driver is implemented for Windows and for RTX platforms. Any other operation systems are upon request. 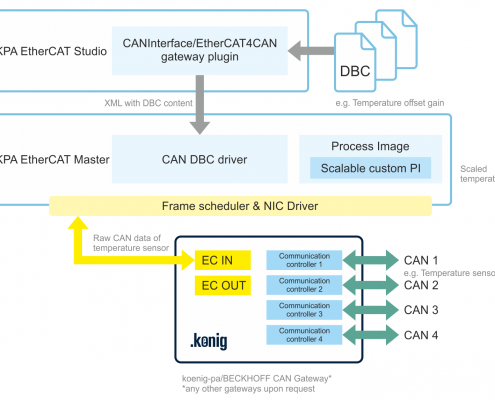